“It was Eric and my family five years ago, but it could be you and yours today or tomorrow. They want all of us to believe that we didn’t see what we saw on that video, but our eyes do not deceive us … Eric is no longer able to speak so I will be his voice and you will hear me.” – Gwen Carr, Eric Garner’s mother.

Eric Garner died pleading for his life on a New York City sidewalk.

The chokehold that triggered his fatal asthma attack was illegal. 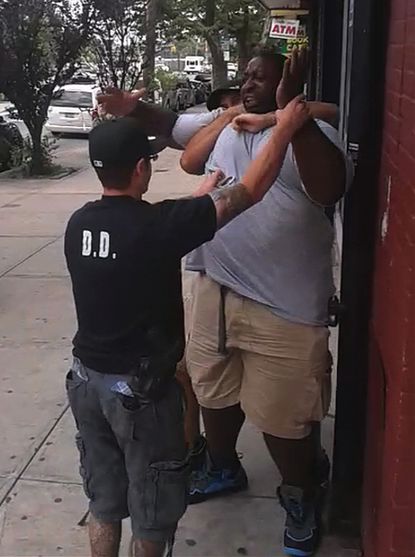 The world saw Pantaleo’s deadly assault. The world heard Garner’s pleas. But there will be no justice for Eric Garner.

When U.S. Attorney General William Barr abandoned the civil rights case against Pantaleo, it sent a devastating message from an administration whose hostility toward civil rights protections is unprecedented in the last 50 years.

Astonishingly, Pantaleo remains a member of the New York Police Department, pending a decision by an administrative judge who is expected to rule within a few weeks.  His continued employment by the NYPD diminishes the institution, and he should be terminated.

It is difficult to imagine the grief of Garner’s family. To lose a father, a son, a brother, to an untimely death is painful enough. To have been dragged through five years of injustice after injustice, to see the person responsible for that death escape accountability seems almost too much to bear.

Not only has Pantaleo escaped accountability, he has received a substantial raise in his pay since Garner’s death.

Sadly, police officers are rarely held accountable when unjustified brutality – local prosecutors are predictably reluctant to bring charges. That’s precisely why the federal government has a special responsibility to seek justice in such cases, and why Attorney General Barr’s failure to do so in the Garner case cuts so deeply.

In the wake of the death of Garner and other unarmed people of color who died violently at the hands of police officers, the National Urban League promulgated a 10-Point Plan for Police Reform and Accountability, elements of which were incorporated into the final report of the President’s Task Force on 21st Century Policing. One of the key recommendations is “external and independent investigations and prosecutions of officer-involved shootings and other use of force situations and in-custody deaths.”

In the Eric Garner case, as in many others, the Department of Justice’s civil rights inquiry was arguably the only hope for an external and independent investigation.

But this is an administration that is intent on weakening enforcement of civil rights laws. Under Barr’s predecessor, Jeff Sessions, the Justice Department abandoned all efforts to work with local police departments to address discriminatory practices. Consent decrees historically have been a crucial tool in the Justice Department’s efforts to ensure constitutional and accountable policing.

The department also tried, unsuccessfully, to block a federal court in Baltimore from approving a consent decree between the city and the Baltimore Police Department to rein in discriminatory police practices that the department itself had negotiated over a multi-year period.

The Department of Justice’s failure to seek justice in the Eric Garner case is just the latest in a series of missteps with regard to civil rights. Our hearts go out to Garner’s family as they suffer yet another blow in the ongoing tragedy of Garner’s untimely death.