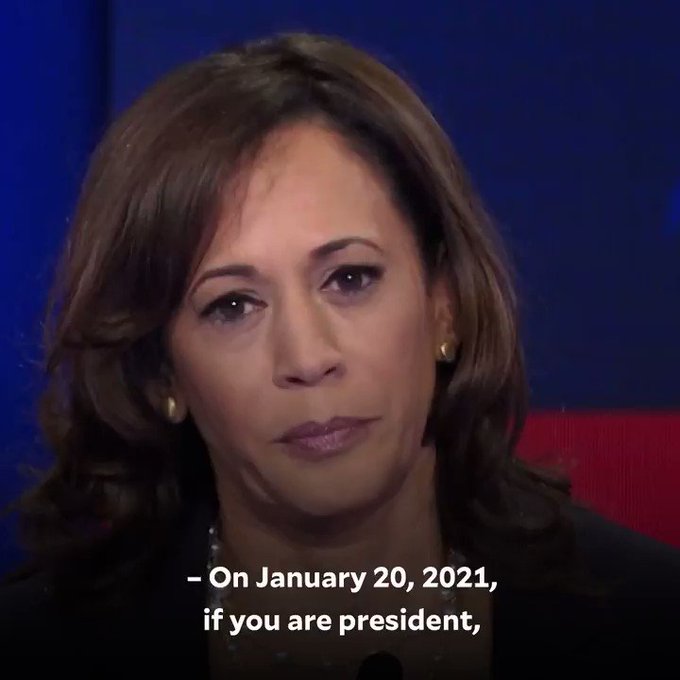 The California senator consistently controlled the stage, including when she pressed Joe Biden to address racial injustice and civil rights.

Sen. Kamala Harris’ first big moment of the debate was saying, “America does not want to witness a food fight.” Her second was heaving an entire tray of spaghetti in former Vice President Joe Biden’s face.

The conversation devolved into undecipherable crosstalk a few minutes into the Democratic debate on Thursday, as 10 presidential candidates tried to stand out at the same time. Biden had just responded to a direct swipe at his age from Rep. Eric Swalwell (D-Calif.) when Harris stepped in and cut through the noise. “America does not want to witness a food fight,” the California senator said. “They want to know how we’re going to put food on their table.”

On a night that featured the two Democratic front-runners ― Biden and Sen. Bernie Sanders (I-Vt.) ― it was Harris who consistently controlled the debate stage time and time again with clear and measured answers, direct and pointed shots, and lucid and tremendously personal examples.

“As the only black person on this stage, I would like to speak on the issue of race,” Harris said, cutting in during a discussion of racial justice.

In the most riveting moment of the night, Harris pointedly told Biden how much he had hurt her when he had boasted about working with two well-known segregationists and talked about his opposition to busing.

“I do not believe you are a racist,” Harris said, turning to the former vice president and saying she agreed with him on the importance of finding common ground. “But it was hurtful to hear you talk about the reputations of two United States senators who built their reputations and career on the segregation of race in this country.”

“It was not only that, but you also worked with them to oppose busing, and there was a little girl in California who was part of the second class to integrate her public schools and she was bused to school every day, and that little girl was me,” she added.

The moment felt historic: A leading candidate for president ― who is the second black woman ever elected to the Senate ― went after an elder statesman for his positions on civil rights and criminal justice that affected her personally. Biden, who was vice president under Barack Obama, has pointed to his record in the administration and his more recent views on issues of race, but Harris made clear that there was more work to be done.

Biden called her comments “a mischaracterization” of his position, saying he did not “praise racists.” He also said that he opposed busing by the Department of Education, not all busing.

“But so the bottom line here is, look, everything I have done in my career, I ran because of civil rights, I continue to think we have to make fundamental changes in civil rights,” he said.

The Harris campaign was quick to tweet out a childhood photo of the senator after the exchange, recognizing that her line landed well.

But from the beginning, Harris did what she could to keep the debate ― and her own responses ― focused.

Early in the evening, Harris rejected the NBC/Telemundo moderators’ question about whether Democrats had a responsibility to explain how they would pay for their various ambitious proposals.

“Where was that question when the Republicans and Donald Trump passed a tax bill that benefits the top 1% and the biggest corporations in this country?” she asked in reply.

On the issue of “Medicare for All” ― on which she appeared to waver during and after her first CNN town hall ― Harris was also resolute, raising her hand alongside Sanders when the moderators asked who was in favor of a government-run health care plan.

But rather than get mired in a debate between Sanders and Sen. Michael Bennet (D-Colo.) about the practicality of prohibiting private health insurance for all but cosmetic procedures, Harris invoked everyday Americans’ difficulties with the private insurance system. She told the story of a hypothetical parent with private insurance who takes a feverish child to the emergency room but debates whether to enter and risk facing a $5,000 out-of-pocket cost.

“That’s what insurance companies are doing!” she declared.

Throughout the night, Harris provided specifics and examples that drove home her points from multiple angles.

When asked about immigration, Harris said she would take executive action on her first day as president to reinstate DACA status and protections, and that she would “further extend protection for deferral of deportation for their parents” and undocumented veterans ― a plan Sanders praised.

“I will release children from cages,” she said. “I will get rid of the private detention centers, and I will ensure that this microphone that the president of the United States holds in her hand is used in a way that is about reflecting the values of our country.”

She also said she didn’t want to live in a country where an undocumented rape victim feared reporting the crime.