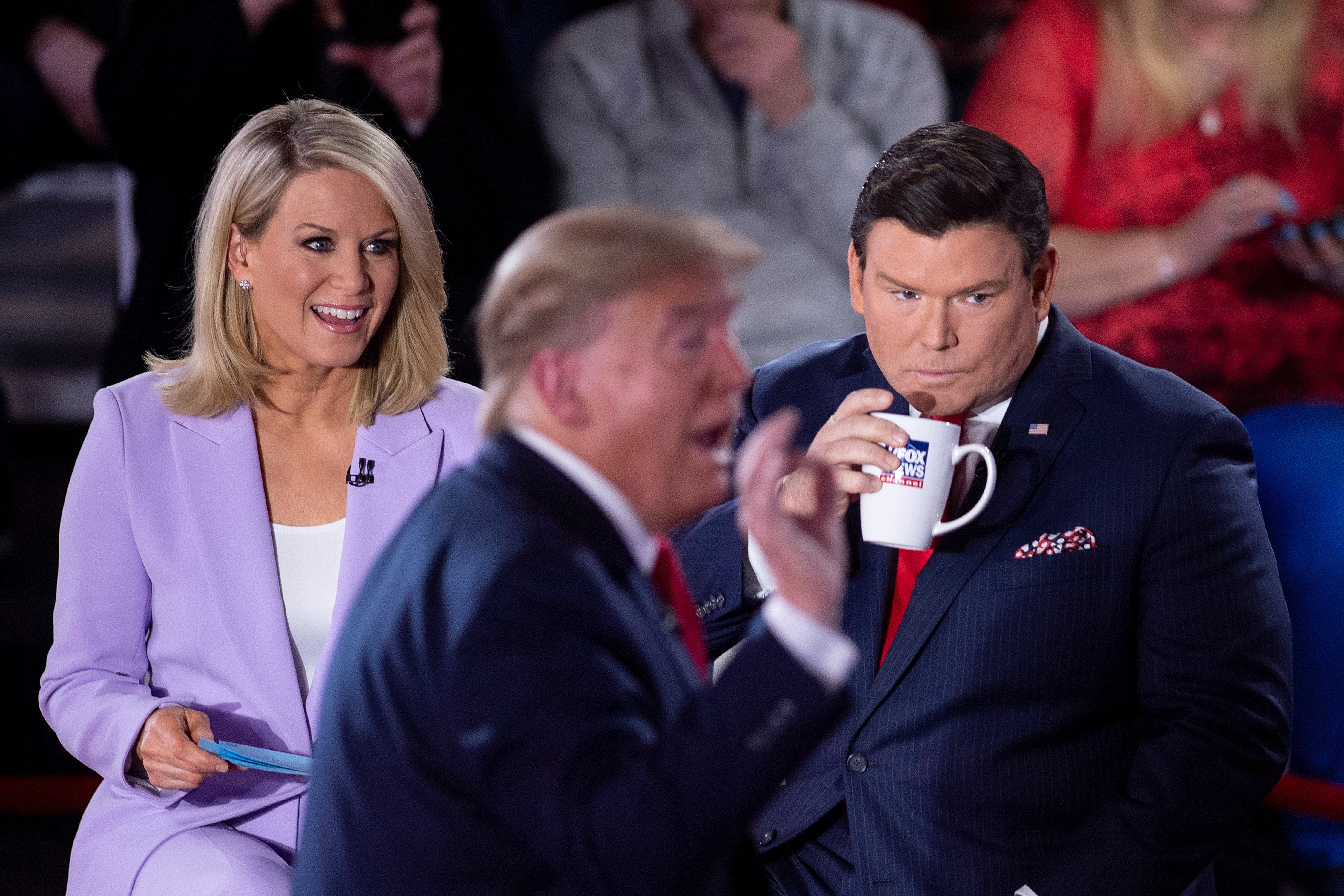 The Fox News president and several on-air personalities have been advised to quarantine after sharing a private plane with someone who later tested positive for the coronavirus, The New York Times reported Sunday.

Chief political anchor Bret Baier, Martha MacCallum of “The Story” and “The Five” hosts Dana Perino and Juan Williams were exposed, along with Fox News President Jay Wallace, the Times noted, citing sources “with direct knowledge of the situation.”

The infected passenger shared a charter flight with executives, reporters and other crew from the conservative news channel to New York from Nashville, Tennessee, after last week’s presidential debate.

The anchors are “expected” to broadcast from home for now, according to the report.

Chris Wallace, the moderator of the first debate, was among several network employees who were tested for COVID-19 after President Donald Trump contracted the virus, The Hill noted.

Baier and MacCallum are scheduled to lead the channel’s election night coverage from its Manhattan headquarters, according to The Hollywood Reporter.

Even as the coronavirus death toll has topped 225,000, Fox News coverage has mostly remained in lockstep with Trump downplaying the pandemic, questioning infectious disease experts, and discounting health precautions like mask-wearing.

A network spokesperson told HuffPost that Fox News would not confirm any details of the exposure due to privacy concerns.

Harris had been scheduled to travel Thursday to North Carolina for events encouraging voters to cast early ballots.

Campaign manager Jen O'Malley Dillon said “neither of these individuals had any contact with Vice President Biden, with Sen. Harris or any other staff member since testing positive or in the 48-hour period prior to their positive test results.” But O'Malley Dillon said Harris would suspend travel for several days “out of an abundance of caution.”

Harris and Biden spent several hours together that day through multiple campaign stops, private meetings and a joint appearance in front of reporters at an airport. They were masked at all times in public, and aides said they were masked in private, as well. Biden and Harris have each had multiple negative tests since then. Harris has had two tests since Oct. 8, most recently Wednesday, O'Malley Dillon said. Biden's last announced negative test was Tuesday. 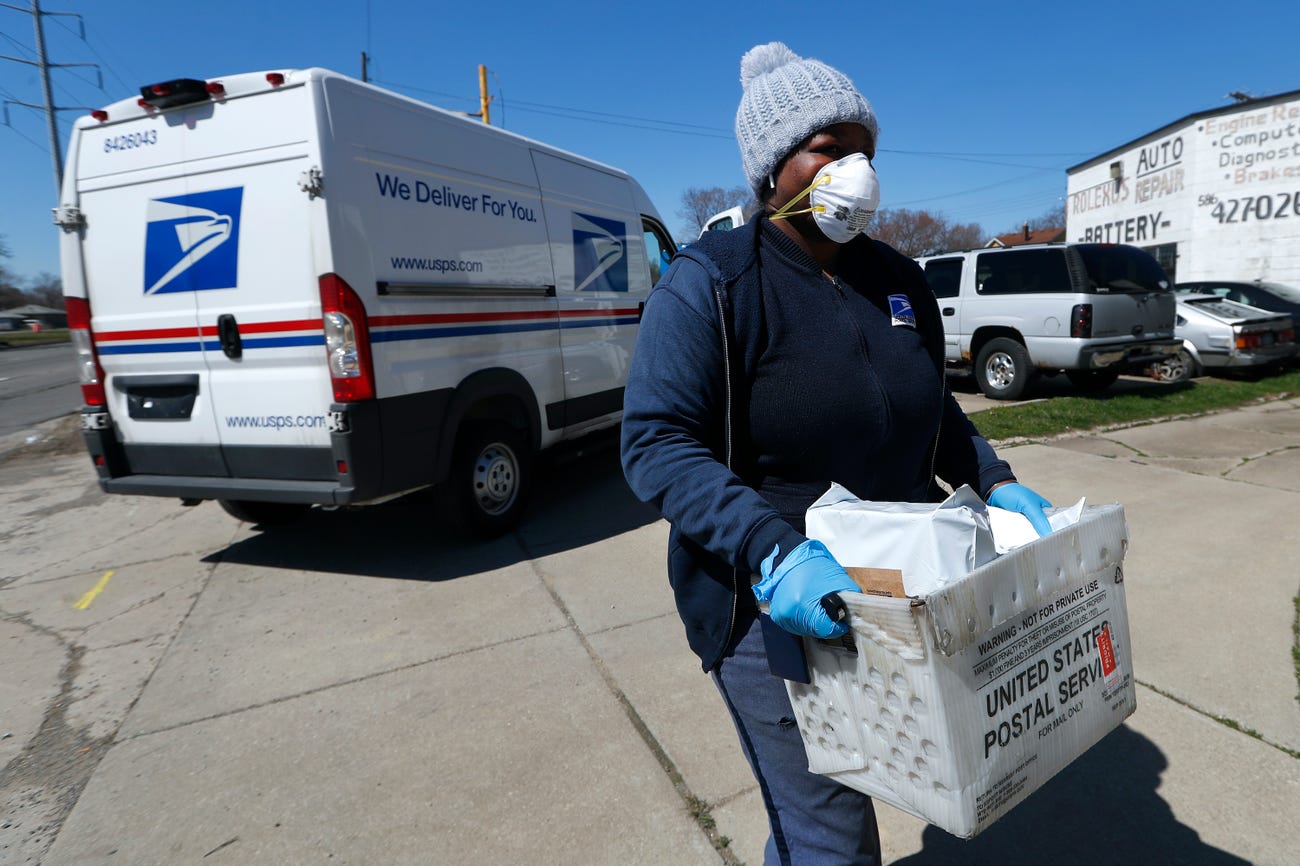 A watchdog organization is calling for an investigation and hearings amid concerns about mail-in ballot “voter suppression tactics” by the Trump administration through the United States Postal Service.

“Recent actions” taken by Postmaster General Louis DeJoy, who was appointed by Donald Trump in May, “will delay prioritizing mail delivery,” which threatens voting by mail, warned a letter Thursday from Citizens for Responsibility and Ethics in Washington to Sen. Ron Johnson (R-Wis.). Johnson is the chairman of the Homeland Security and Governmental Affairs Committee.

The number of Americans voting by mail is expected to surge across the nation as voters seek to avoid the risk of catching COVID-19 at the polls. Yet DeJoy is slashing overtime for mail carriers and prohibiting employees from making late delivery trips, which will slow the mail, he revealed in an internal memo. DeJoy, who has no experience in the agency, is a prominent Trump donor and the former lead fundraiser for the Republican National Convention.

“We have an underfunded state and local election system and a deliberate slowdown in the Postal Service,” Wendy Fields, the executive director of the Democracy Initiative, told The New York Times. Trump is “deliberately orchestrating suppression and using the post office as a tool to do it,” she said.

Former Democratic leader of the Georgia House and Democratic vice presidential hopeful Stacy Abrams also accused Trump on Sunday of attempting to “steal” the election by manipulating the postal service along with his partisan postmaster general.

After significant delays by the USPS in delivering absentee ballots to voters in Wisconsin’s April primary, a probe by the USPS Office of Inspector General determined that the agency needed to “strengthen adherence to procedures” and “improve communication and coordination” with election offices.

CREW’s letter, which was also signed by Common Cause Wisconsin, calls on Johnson’s Senate committee to determine whether USPS is proactively addressing the “increased national demand for voting by mail” this November. The committee must also determine how cutting back on overtime and extended deliveries by the USPS will impact voting by mail, the letter states.

Trump has railed about “fraudulent” mail-in ballots, without any basis. He called the upcoming election “fixed” and “rigged,” and the “greatest election disaster in history” — even though the election hasn’t yet occurred.

The system is so suspect, he claimed, that Trump floated the idea of delaying the election in a tweet last Thursday. Trump has no power to do so.

Bizarrely, he urged Americans on Friday to vote via “absentee” ballot, which is a mailed-in vote. Most jurisdictions’ “vote by mail” systems have identical requirements for all voters.

Michael Steele, former head of the Republican National Committee, later responded in an interview: “The president was like, ‘Well, I love absentee balloting, just [not] this mail-by-vote thing.’ Mr. President, they’re the same thing, OK? Just so you understand: An absentee ballot is the same as a mail-in ballot.”

Critics have charged that Trump is already worried that he’ll lose the election, so he’s strategizing to discredit and even sabotage mail-in votes so he can claim that his defeat was “rigged.”

“Mark my words, I think he is gonna try to kick back the election somehow, come up with some rationale why it can’t be held,” Democratic presidential candidate Joe Biden said back in April.

House Majority Whip Jim Clyburn (D-S.C.) on Sunday said he believes Trump won’t leave the White House if he loses the election, and warned the president might invoke some kind of “emergency” action to remain.

Trump’s proposal to delay the U.S. election has infuriated Democrats and has not been supported by Republicans. 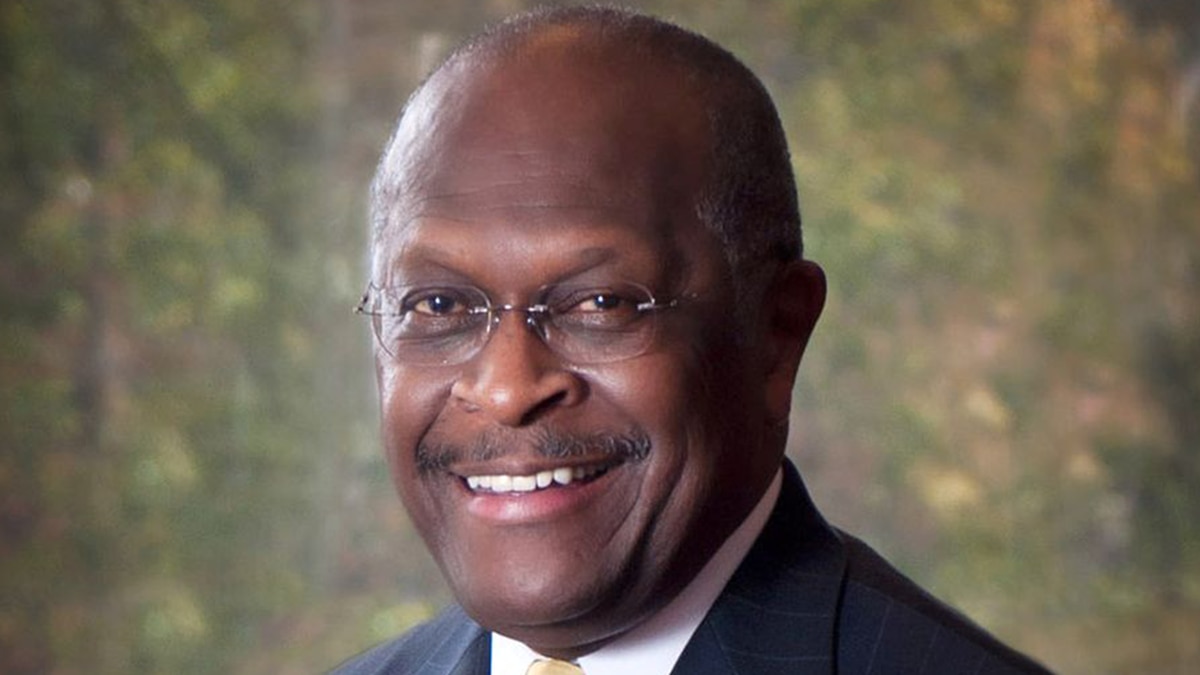 Herman Cain, a former business executive who ran for the 2012 Republican presidential nomination, has died at the age of 74.

Cain reportedly learned that he tested positive for COVID-19 on June 29. He was hospitalized two days later after developing “serious” symptoms, according to a statement shared on his Twitter account at the time.

His diagnosis came less than two weeks after he attended President Donald Trump’s campaign rally in Tulsa, Oklahoma. Cain, who co-chaired Black Voices for Trump, tweeted a photo of himself without a mask at the event, which was attended by several thousand people. 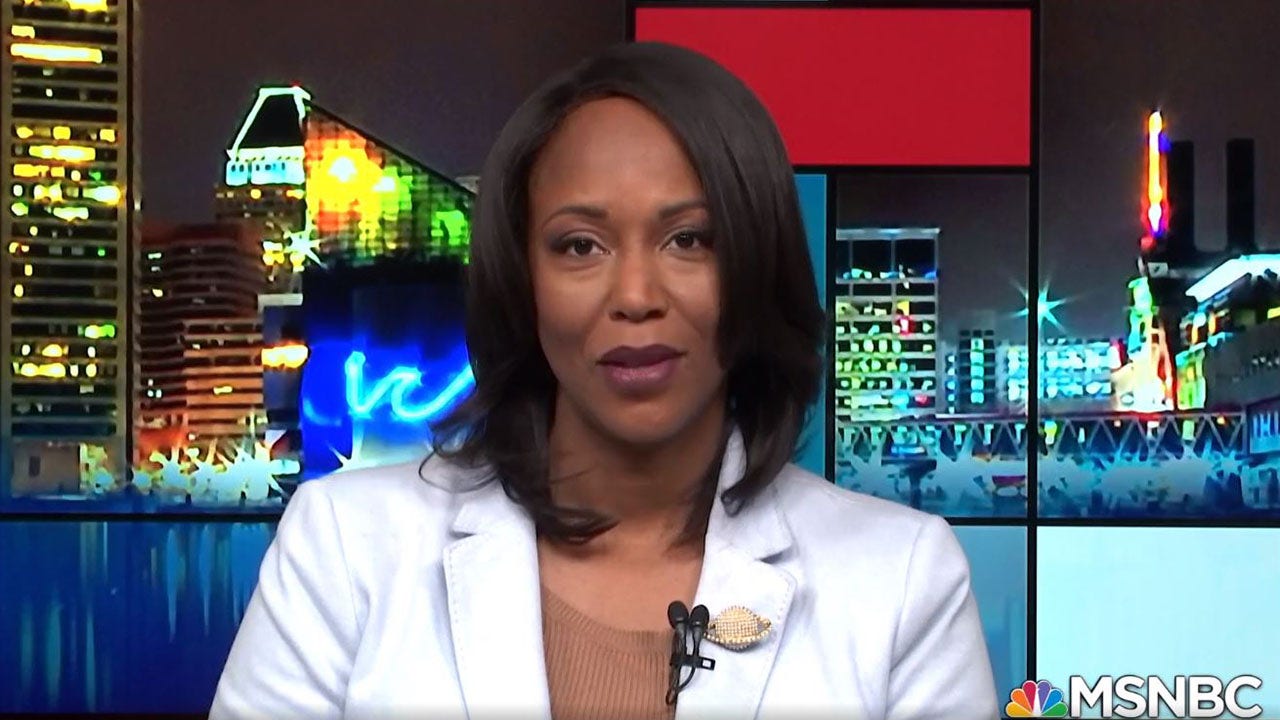 Rockeymoore Cummings resigned as chairwoman of the Maryland Democratic Party on Monday. She said her husband had wanted her “to continue this fight.”

Maya Rockeymoore Cummings, the former chairwoman of the Maryland Democratic Party and widow of U.S. Rep. Elijah Cummings, announced Monday night that she would seek her late husband’s congressional seat.

“I believe very strongly that I have the background and the focus and the commitment and the ability to take the reins,” Rockeymoore Cummings told MSNBC’s Rachel Maddow, adding that her husband had wanted her “to continue this fight.”

Rockeymoore Cummings, a longtime political consultant and former 2018 gubernatorial candidate, said she’d had a discussion about six months ago with her husband about the possibility of running for his seat. Rep. Cummings, a vocal opponent of President Donald Trump’s and a beloved Baltimore son, died on Oct. 17 due to complications from longstanding health problems. He was 68.

“I am, of course, devastated at the loss of my spouse, but his spirit is with me,” Rockeymoore Cummings told The Baltimore Sun as she announced her decision to throw her hat into the already-crowded ring of candidates vying for her husband’s seat.

Rockeymoore Cummings, 48, resigned as the chair of the Maryland Democratic Party on Monday, a role she’d served in since December, The Washington Post reported.

She told the Sun that she would be undergoing a preventative double mastectomy this Friday. Her mother died of the disease in 2015, and her sister was diagnosed last year, she said.

“I’m going to take the time I need to heal and do what I can behind the scenes to make sure my campaign is strong,” Rockeymoore Cummings told the newspaper. “It’s going to be a sprint election.”

At least eight Democrats, including former Congressman and NAACP leader Kweisi Mfume, and three Republicans have already filed to run in the special Feb. 4 primary for Cummings’ 7th District seat, the Sun reported.

The district includes parts of the city of Baltimore and Howard and Baltimore counties.